I recently read Jacob Haqq-Misra’s Planetary Messenger, and highly recommend it to anyone interested in the philosophies behind our existence.   Here’s a review I wrote for Jacob‘s book: 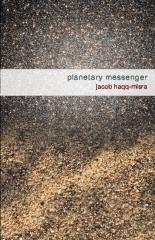 Planetary Messenger reminds us that it is inaccurate to view Homo Sapiens as the single most important species in the universe, and that just because we as humans walk upright in what we consider to be a technologically advanced society, that not all forms of life behave the same. Modern cultures assume that for non-human life to exist as a civilized colony, it must first appear and operate similarly to ourselves.

During Shane’s travels to The Planet Finder convention in Washington D.C., Haqq-Misra unravels the flaws behind this unlogical means of comparison, and introduces unique theories to challenge the conflicts between science and religion. Shane learns that the success of human kind is largely attributed to chance, and that the facts behind our existence – whether acquired through historical records, scientific fact, religious scripture or personal belief – will continue to evolve. Though it may not be easy, we must allow culture and religion to incorporate new and understood viewpoints if we want to comprehend the bounds of life.