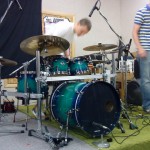 On Sunday I got together with Vitamin Funk to do some jamming and recording before Chris and Mike headed back to college. We had some room-mic recordings of most of our tunes prior to the weekend, but wanted new takes on some of them with a sax player we recently met.

In about two hours we ended up laying down five tunes (bear in mind the goal wasn’t a professionally isolated studio recording). 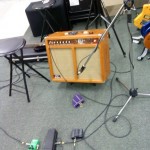 Three were previously written, and the other two were an upbeat blues song and a reggae beat – both ideas that came up while fooling around earlier in the summer. They were both on file as well, but we wanted a more formal shot at them with more than one mic in the room. The three originals were Off the Wall, Jammy Moe, and Keeping it Funky.

Sunday was a great time, and I look forward to the next Vitamin Funk show whenever that may be. We’re toying with the idea of setting up a show or two in State College around Thanksgiving. I’ll let you know if that comes to fruition.