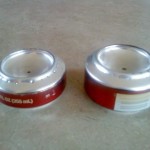 The second stove is taller than the first

About three weeks ago I made my first soda can stove using the instructions at YGringas.net. His instructions are thorough, so there’s no reason to rewrite them here.

I first heard of the concept while doing a section hike on the AT (I believe just south of The Pinnacle). A thruhiker I ran into named Badger had just picked one up and explained to me that it could boil water. With my new pack on the way (I had just ordered it), I saw this as an opportunity to whittle away at the ounces I carry on overnight trips. 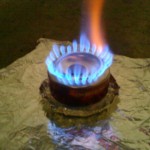 The taller stove, just after the jets kicked in

I found that the first model I made did not quite boil water. The stove was filled with denatured alcohol and my cooking pot had about 1.5 cups of water and no lid. The jets seemed to be working ok, so the only adjustment made on the second stove was height – I made it about a quarter inch taller to hold more fuel. Filling the second stove to the top (up to the fill-hole) did the trick. After 1.5 – 2 minutes, the jets were going, by 7 minutes water was boiling, and the jets continued burning until about 9 minutes.

This should take care of any oatmeal, tea, or ramen noodles I’ll be cooking in the woods. At some point I want to measure how many ounces of fuel it takes for a single run. With that I can get a good estimate on how much fuel I need per hike.